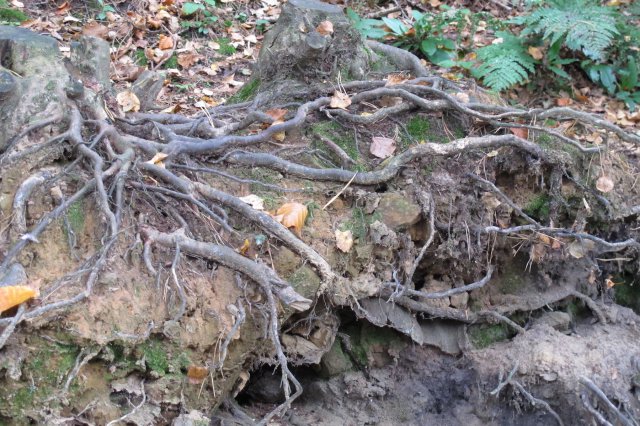 The idea for "Rooted to the Spot" was inspired by Brexit and this project is dedicated to all those people who have, in one way or another, told me and members of my family that if we were proud of our roots we shouldn't need to move away.

Rooted to the spot: "unable to move because you are very frightened or shocked" - Collins English Dictionary

Before the referendum in which a small majority of those who voted decided they wanted the UK to leave the EU my home in Staffordshire was my base, my anchor in the world: the place where my roots were planted. Where ever I travelled, worked or lived the culture and values of my home came too. I discovered new things, adopted new ideas, learned to look at my home through the eyes of others. I was proud to be British. England was where I was born but I don't think of myself as English. My nationality: British, a British European. A Briton who could remain a Briton but live, work and advertise Britishness anywhere in the 28 member states of the European Union with the confidence of a local, where I did not feel foreign. I could move to Barcelona or Berlin as easily as Birmingham. I was a Briton who, when working internationally felt able to speak on behalf of my colleagues across Europe.

After the referendum my home in Staffordshire is still my base, but it is said you never really love someone unless you love them knowing their faults. That is true of home and the attitudes of people I considered my friends, the reaction of the government and my local MP to Brexit have challenged my attachment to my roots and to Britain. Boris Johnson may claim that allegiance to a foreign place diminishes allegiance to ones own nation (Behind paywall: Telegraph article 15th September 2017), but I disagree. A multi-layered identify no more diminishes national pride and patriotism than a second child reduces the parents' love of their first born.

So the Brexit referendum opened my eyes to faults I had not previously seen; to a collective lack of confidence in Britain's ability to hold its place in Europe while at the same time fantasising about the leading global role our great nation would be free to pursue. An attitude of pulling up the drawbridge while simultaneously conquering the world has taken hold. An arrogance born out of a schoolboy hero version of history is now a required aspect of patriotism.

Brexit has smashed my identity. In less than two years I will be a foreigner in 27 countries where, until the referendum, I felt at home. Brexit is enforcing allientation from our European family. I no longer feel able to represent my European colleagues and I see many of them equally bewildered as the country in which they have lived, made home, and supported with their skills and taxes angrilly and chaotically debates whether they can stay. They became foreign overnight.

Brexiters talk about free trade deals, but they seem to think that people should stay rooted to their place of birth unless they migrate as work resources: "if they are skilled and we need their skills they will be welcome ..." well for two or three, maybe up to five years! Brexit is reducing people to units of production. Come here: be prepared to suspend your life. Don't fall in love, don't get married and don't try to settle in our land. Remember you are here under sufferance. Good people will chose elsewhere.

And they are imposing the same restrictions on their fellow Britons. My daughter has been told that Britain should be good enough. There is no need to go elsewhere to study and to consider doing so is "to do the country down". Even moving to a university in another city was enough to evoke a "What's wrong with the local uni? It was good enough for my kids, why isn't it good enough for you?" from one.

No one has persuaded me that Brexit is in the best interests of the UK, although it would be a consolation if someone would.  I'm not surprised about the #Brexitshambles and #Brexitchaos arising from a policy based on having the cake and eating it, but likely economic and social chaos aside the most serious consequence to date is the government's invocation of "will of the people" and the increasing executive power it is acquiring to ensure that it is met. History warns that these are significant steps towards dictatorship.

Here goes: why the Withdrawal Bill is a botched Bill, and why MPs should vote against it on second reading.

I no longer recognise in "official Britain" the values I thought of as British: openness, tolerance, innovation and confidence. A small but vocal minority has seized the government which now seems not only to condone but, in its disarray and panic, to support a xenophobic attitude and foster unrealistic expectations of a return to an empire that never was.

A concerned friend from London asked me what it was like living in a Brexit area. Despite the protestations of the government to the contrary, there is significant division and the "citizen of nowhere" and "will of the people" rhetoric does nothing the help.

The 'Will of the People' sounds like the democratic notion par excellence, but I will argue it is a deadly threat to democracy. /1

The timeless pleasures of connecting with nature, walking the dog, watching the birds, photographing the flowers and feeling the cycle of the seasons will help to distract me from the state of the nation

I am not too frightened or shocked to move, indeed my initial response to Brexit was to move somewhere else, but I am about to retire. My days of travelling for anything other than holiday will soon be at an end. The uncertainty of Brexit means that retiring to Spain, Greece, Italy, or other mediterranean sun spot may not be a practical option.

The Brexiters may not mind being rooted to the spot for fear that leaving will signal to other members of their tribe that they are being disloyal to their roots, but I am sad that their actions may prevent our fellow Europeans from so easily comming here to bring skills, alternative views and add to the community, culture and economy of this area.

So, as a retirement project I'll attempt to reflect the character of the people and places within a ten mile radius of my house to show case it to the world and my fellow EU citizens who may now feel less welcome. The timeless pleasures of connecting with nature, walking the dog, watching the birds, photographing the flowers and feeling the cycle of the seasons will help to distract me from the state of the nation.

The Brexiters who call us Remainers unpatriotic are completely and uterly wrong. We are proud of what we believed Britain to be and we were confident that Britain was playing a leading part in the European Union, combining its influence with the other great nations of Europe and increasing its status in the world. Like any great player, a great country need to be part of a team to properly exploit its potential. We will not give up.